In 1962, two school teachers, Don and Sue McLean, realised the need for a female participation sport in the Charlestown and its surrounding areas. Initially they entered two female basketball (as netball was known at that time) teams in a Belmont based competition. The next year eight teams formed, and because of transport problems, they decided to start their own competition, based at Attunga Park (near the present Charlestown Pool).

As the competition grew, it was moved to the Reary Park at Dudley, with 60 teams participating by 1966. Because of the distance to Dudley, a competition was re-started at Attunga Park in 1967, with up to 33 teams playing there.

In March 1970, the two clubs amalgamated and in the same year the sport changed its name from basketball to netball. With the amalgamation up to 96 teams were playing at Attunga Park, and this, combined with training and local school use, meant these facilities soon became bare of grass and very dusty.

Through the dedication and foresight of people like Mrs. Essie Toneguzzi and the late Mr. Jack Stewart MLA, a push to acquire land from the cemetery trust in the Whitebridge area was instigated. This push did not see fruition immediately however, and after the passing on of Mr. Stewart, newly elected Mr. Richard Face, MLA picked up the challenge on our behalf with eventual success. Lake Macquarie City Council, The Department of Sport and Recreation and the Clubs own fundraising activities have been largely responsible for the present day facilities. These include 24 tar sealed courts, with lighting, 10 grass courts available as required, sealed car parking plus an excellent clubhouse providing, canteen, office, first aid room, meeting room, and toilet and shower facilities. 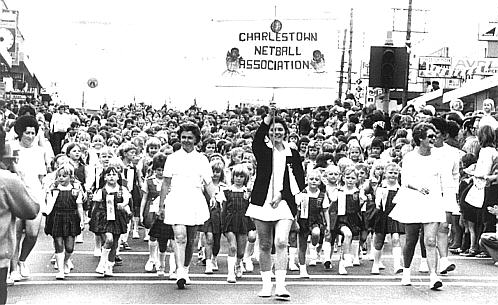 In February 1980, Charlestown Netball Association (C.N.A.) was accepted by the N.S.W. Netball Association as a District Association in its own right, and as a result of our affiliation, we were able to send our first Representative teams away under our own banner, to compete at State levels. Since 1981 we have had 68 Umpires badged, and of these 12 have been upgraded to 'B' grade and one to 'A' grade.

Feeder clubs, for our Association are currently Central Leagues, Dudley-Redhead, Kahibah and United plus many Independent teams.

Since then we have won many divisions and championships. Charlestown Netball Association has come a long way since its small beginning. Of course without a hard working committee, it would not be the success it is today.

Please go to our Awards page to see our list of Life Members.

Please go to our Awards page to see the recipients of the Essie Toneguzzi Service Award.